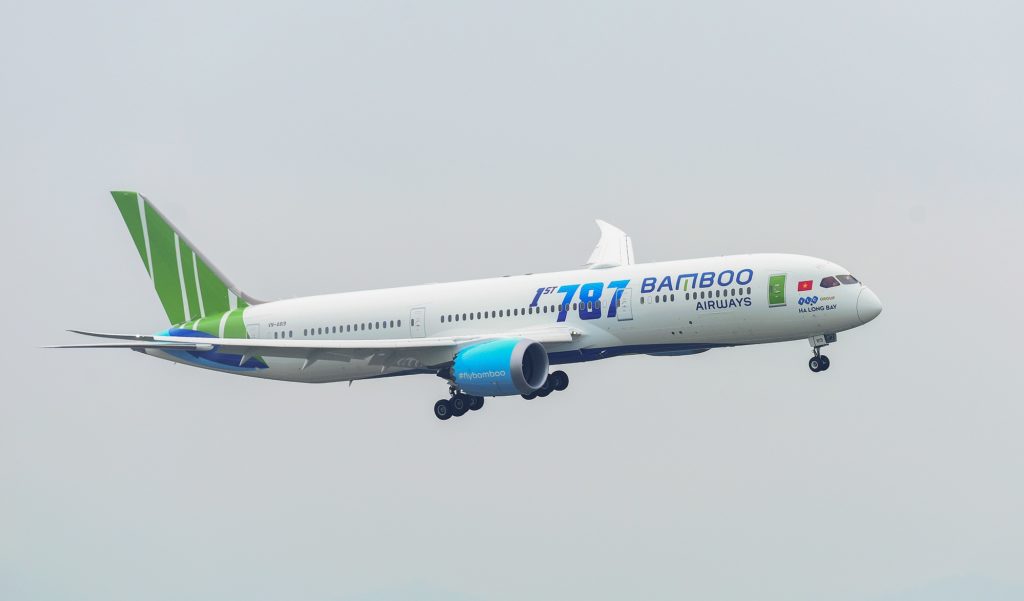 Vietnam’s most exciting startup airline, Bamboo Airways, has begun service using its brand new Boeing 787-9 Dreamliner. The airline began flying the Dreamliner on January 2nd, 2020, on the high demand route between Hanoi (HAN) and Ho Chi Minh City (SGN). Three of the 14 daily flights between the city pair are served by the Dreamliner, with more expected to be added as well as a route to Phu Quoc from mid-January onwards.

One of the most highly anticipated startups of the last 12 months has to be Bamboo Airways. Taking its first flight almost exactly a year ago, the airline has some bold plans for expansion, from flying to the US with Dreamliners to operating an A380 long haul, the airline clearly has plans for rapid growth in the very near future.

A marker of the beginning of this expansion is, without doubt, the inauguration of the airline’s first widebody aircraft, which it took delivery of last month. The Boeing 787-9 Dreamliner, registered VN-A819, arrived in Vietnam on December 22ns, making Bamboo Airways the first private company to operate a widebody plane.

This Dreamliner is the first of 30 on order for the carrier, who has already noted ambitious plans to use these aircraft on long haul services. However, today it seems that the long-awaited launch of the Bamboo Airways Boeing 787 has already happened!

As reported by Routesonline, Bamboo Airways is already flying the 787-9 Dreamliner, but not on any particularly challenging routes. As British Airways did with its new A350, it seems the airline is undertaking a period of familiarization flights, using the aircraft on shorter journeys to give the crew a chance to get used to the type.

Routesonline reports that the 787-9 is being used on the Hanoi to Ho Chi Minh service within Vietnam on three out of the airline’s 14 daily flights. Specifically, you can catch the brand new Dreamliner:

All services are daily. The airline has plans in place to increase the Dreamliner service between these cities to five times per day by mid-January, adding QH211 and QH259 from Hanoi, and QH204 and QH256 from HCMC.

The 787 is configured with 294 seats between three classes. There is space for 26 in the business class cabin, 21 in premium economy and a total of 247 economy seats. This domestic routing is a great opportunity to try out the shiny new cabin on the 787-9 Dreamliner without flying long haul, so if you’re in Vietnam, be sure to check it out!