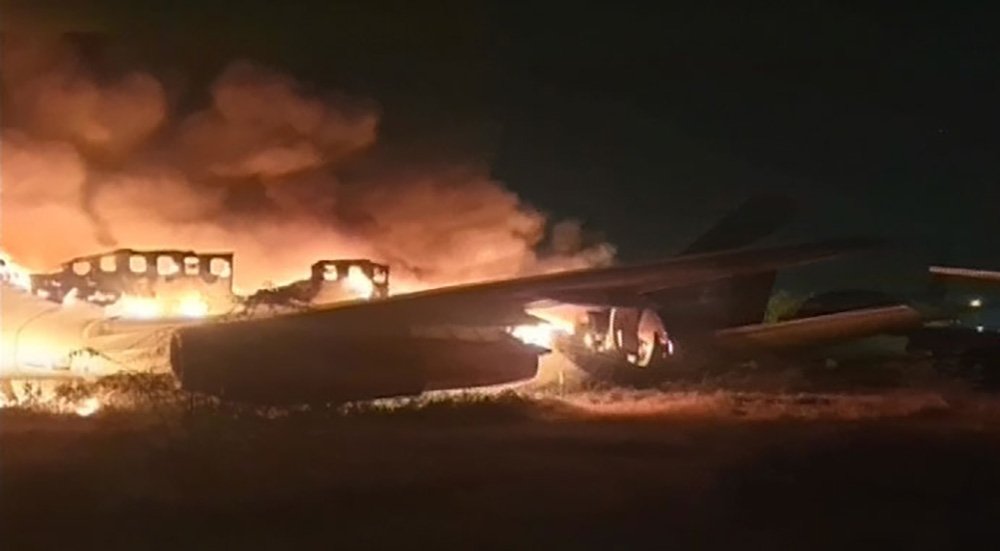 On Sunday evening a Shaheen Air Boeing 737-200 was destroyed by fire at Karachi’s Jinnah International Airport in Pakistan. Preliminary reports suggest that the fire was intentional. The Pakistan Civil Aviation Authority (CAA) is investigating the matter.

Authorities have formed a six-member committee to probe the incident. One of their main goals will be to determine whether the fire was an accident or a case of arson. The committee will report its findings to the Director-General of Pakistan’s CAA. In fact, based on a document obtained by Ary News, the committee has three goals:

Ary News notes that the Airport Security Force (ASF) had written to Pakistan’s CAA a number of times regarding the removal of grounded planes at Karachi airport. The ASF says that these grounded aircraft pose a threat to security and are also a risk for other planes due to continuous bird strikes. It’s unclear the connection between grounded planes and bird strikes as it wasn’t spelled out in detail. However, it’s possible that birds were nesting in and around the sections of these aircraft – this is speculation only.

According to information obtained by Airfleets, the aircraft had the registration AP-BIS and was previously operated by a number of airlines including Air France, Air Sicilia and Nationwide Airlines. The 37-year-old Boeing 737-200 was delivered to Shaheen Air in 2010.

Who is (was) Shaheen Air

Shaheen Air had suspended its operations in October 2018. The private company was identified as a ‘defaulter’ with Pakistan’s Federal Board of Revenue (FBR) – equivalent to the United States’ IRS. According to Ary News, Shaheen Airways owes Rs1.4 billion to the FBR and CAA – the equivalent of US$9 million.

The grounded airline reportedly has a total of 25 aircraft in its fleet with 12 of these grounded at Jinnah International Airport, Karachi. Airfleets indicates 32 aircraft are stored.

We’ve reported on numerous cases of aircraft and airport fires. However, we have yet to report on a case of suspected arson with regard to an aircraft. If the aircraft was intentionally set ablaze, it raises the question of motive and who might want to have the aircraft removed. Could it have been mere mischief? A plot to collect insurance money? We’ll have to wait for the investigation committee to get to the bottom of this mystery and report its findings.

What do you think is the cause of the fire? If it was intentional, what might the motive be? Let us know what you think by leaving a comment!

We contacted Pakistan’s Civil Aviation Authority with a request for comment. No response was received at the time of publishing this article.