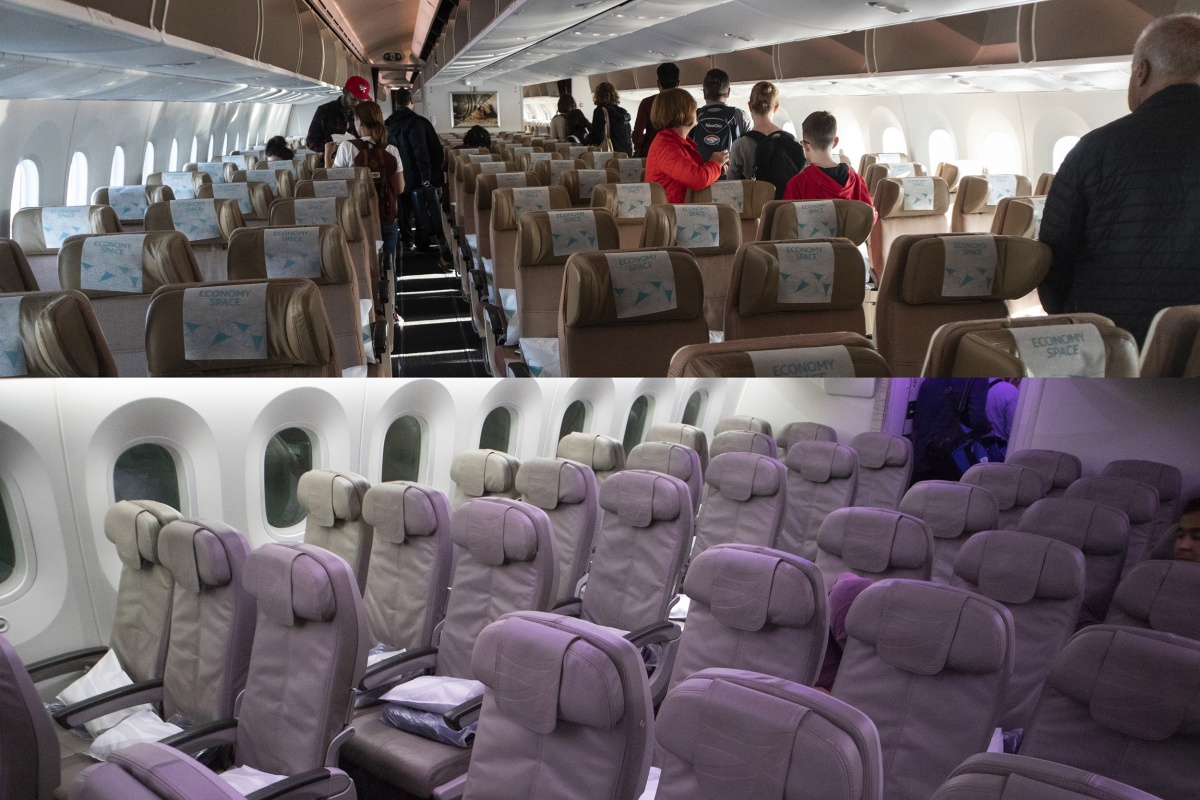 Although Dubai-based Emirates and Doha-based Qatar are constantly in the spotlight, there are a few other decent full-service carriers in the Middle East. Today we’ll compare the economy class experience between Saudi Arabia’s Saudia and Abu Dhabi-based Etihad. Both are excellent products (especially compared to anything in North America) so it will be quite the showdown…

This article will primarily compare the recent experiences I had on the two airlines. The first was a Singapore to Jeddah service on Saudia and the second, an Abu Dhabi to Rome flight on Etihad. As you can tell by the distance between the cities, both flights were long-haul- although the Saudia flight was just under two hours longer.

Both flights utilized the Boeing 787-9 Dreamliner and, as the article title states, both experiences were in economy class. I should note, however, that Etihad put me in an Economy Space seat – which apparently offers 5″ more pitch over the regular economy seating.

I think the type of seats offered by the two airlines might come down to personal preference. For Saudia, guests have a smooth beige leather surface for their journey. The chairs have adjustable headrests with side ‘wings’ that fold out to keep your head from rolling off the side.

Etihad, on the other hand, has a cloth fabric for its seat cover. The Etihad economy experience also had one of the more interesting headrests I’ve encountered with the hundreds of flights I’ve flown. Every economy seat headrest has a solid, fixed, protruding ‘wing’ that juts out on one side. It juts out quite far to provide full head support if you choose to rest your head on it.

I think I prefer the look and feel of Saudia’s seating – it feels much ‘cleaner’ and a little more ‘classy’. However, I think Etihad’s big side-wing on its headrests is an excellent idea. I’ve seen too many passengers head-bob and struggle with sleep because their heads had insufficient side-support.

Unfortunately, I can’t make an authoritative and personal statement on which economy class offers better space. This is because I didn’t get to try ‘regular’ Etihad economy. I can say that Etihad’s ‘Economy Space’ has 3-4 inches more pitch than Saudia’s 787 economy. Nevertheless, I found the legroom in Saudia’s economy to be good enough for me at nearly six feet tall.

Both airline seats offered in-seat power and full international electrical sockets in addition to USB outlets. Saudia’s is down below the seat while Etihad’s is in the seatback in front. This comes down to personal preference. While Saudia’s plug location is more difficult to access, it’s easier to get around if you have to get out of your seat.

Both airlines provided blankets and pillows for the flight.

As you can see from the one ‘screenshot’ of Saudia’s newer IFE, there is some pretty impressive functionality. You can use the screen to select when flight attendants should wake you up for meal services and when they should leave you alone. Unfortunately, I didn’t get to test this out. I know there is a very real risk that flight attendants are too busy to check these settings. Saudia’s newer IFE also has a messaging system so you can send messages to people in other seats – for those times you don’t get to sit beside each other.

The one ‘fancy’ feature for Etihad is its remote control, which also has a built-in high definition touchscreen. It’s a nice feature that allows you to sit back and navigate through the entertainment system menu much more easily.

I thought the entertainment selection for both systems was fairly good. I think the menu system is better designed on Etihad. On Saudia, there were parts within the Audio section that were very poorly labeled and did not display the artist (only the album name).

For WiFi, Saudia wins by virtue of having a free 10mb messaging option. Etihad has nothing like this and so passengers will need to pay, even for the most basic level of WiFi service. At least, with Saudia’s free plan, you can send and receive some WhatsApp or Facebook Messenger messages and keep on top of some basic communications.

The food (and beverages)

Saudia’s inflight meal service feels quite elegant. It begins with the distribution of nicely printed menus and then table (tray) cloths. Both add a little touch of class to the whole inflight meal experience. I know it’s all psychology, but having the meal described in detail on the menu just feels better. It adds a little more civility to the question “chicken or pasta?”

The taste and quality of all my Saudia meal experiences have been top-notch. On an A320 economy flight from Milan to Riyadh they even offered whole bananas as a snack option which was something I had never seen before.

Etihad’s meal sadly did not include a nice tablecloth. However, the chicken and vegetables I selected were fantastic. The dessert was nicely packaged but the mango-passion mousse was more on the liquid side than a light/fluffy consistency – rather disappointing.

The one unique thing about Etihad’s inflight meal service is that passengers can now pay for extra food. It’s outlined in a menu found in the seatback pocket and you get a reminder when the inflight entertainment system starts up. I think this is good in terms of food diversity -and for anyone who might be extra hungry. I just hope it doesn’t give the airline license to cut back on the quality or size of their complimentary offering.

For beverages, one thing I enjoy about Middle Eastern carriers is that they serve more than the usual apple, orange, and tomato juice options. If my memory is correct, both Saudia and Etihad serve mango and guava juices (someone please correct me if I’m wrong).

On the beverage side, the one big difference with Saudia is that flights are ‘dry’, meaning that no alcohol is served (or even permitted) in the aircraft cabin. On the other hand, Etihad does serve alcoholic drinks on its flights.

My experience with flight attendant service on both airlines was excellent with no complaints. On both Saudia and Etihad, all of the cabin crew were professional and courteous and offered service with a smile. The one point that goes to Saudia is the hot towel service that is offered at the beginning of the flight. I don’t recall that being a thing with Etihad.

This comparison only covers the inflight experience in economy and doesn’t take into account the number of routes/destinations offered by each airline or the experience at the airport. Hopefully, however, if you have a choice between either of these two airlines this article will help you make a selection. Happy travels!