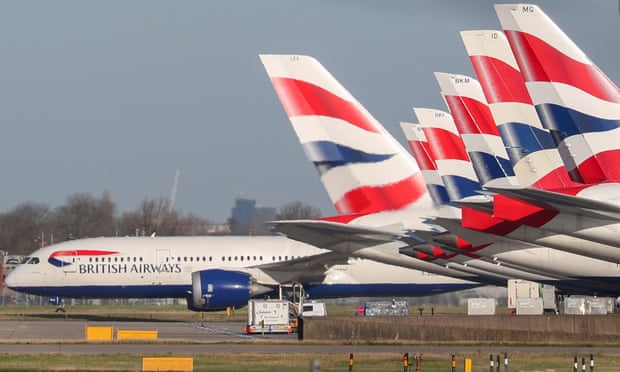 British Airways has warned staff it is in a fight for survival and expects to make job cuts and ground an unprecedented number of planes, as it said the coronavirus pandemic has caused a crisis “worse than 9/11” for the airline industry.

BA’s chief executive, Alex Cruz, said in a message to 45,000 employees entitled “The Survival of British Airways” that the airline would be “parking aircraft in a way we never have before” after the drop in demand was compounded by the shock US travel ban from Europe announced on Wednesday night. It came as the German media reported that the country’s flagship carrier, Lufthansa, might ground most of its fleet and ask for state aid in the wake of Donald Trump’s surprise move.

Although BA and UK visitors were exempted from the US ban, about a quarter of passengers from Heathrow are in transit from countries in the Schengen passport-free zone and the move will have further deterred potential travellers on BA’s most lucrative transatlantic routes.

Cruz told BA’s staff that coronavirus was “a crisis of global proportions like no other we have known”, in the message– seen by the Reuters.

He warned staff that layoffs were coming, “perhaps for a short period, perhaps longer term”. The company is in discussions with trade unions to shore up its cash position and try to protect jobs.

He added: “Please do not underestimate the seriousness of this for our company.”

BA’s is part of International Airlines Group (IAG) and its main sister carrier, Iberia, has been directly affected by the US travel ban. Madrid, where Iberia is based, is the focus of a major Covid-19 outbreak and on Friday the Foreign Office advised against all but essential travel to the Spanish capital.

BA has already cut hundreds of flights from its winter schedule, mainly to Europe, although it has yet to confirm what further flights will be axed in coming weeks.

Airlines have already amended booking terms and conditions to allow passengers to book with more confidence, with easyJet going as far as allowing customers to rebook to any destination without charge, up to the day of travel.

Lufthansa, which is the European airline with the most flights directly affected by the US ban, is to ask the German chancellor, Angela Merkel, to intervene, according to reports in the Handelsblatt newspaper.

Lufthansa is said to be considering a range of options to deal with the crisis, including the temporary suspension of most flights across its network.

Air France-KLM are continuing to operate some flights to the US and have yet to confirm what further measures they are taking.

Even before the Trump ban, the International Air Transport Association had warned that passenger airlines could lose up to $113bn (£87bn) in revenues this year.

In the UK, where the regional carrier Flybe collapsed after the outbreak of coronavirus, fears that the wider aviation industry could follow have been raised further, with news of job cuts at Edinburgh Airport. The Unite trade union warned that Edinburgh, following Southampton airport, was on the brink of collapse without government help.

Norwegian is in talks with its government for urgent aid to ensure its survival. The Oslo government slashed air taxes on Friday but the airline said it was not enough. Its chief executive, Jacob Schram, said: “We need exact measures to strengthen our liquidity in the short term immediately.”

The airline, which operates long-haul, low-cost transatlantic flights, on Thursday announced it would be laying off up to half of its staff during the crisis. It has also cut about 4,000 flights.